Miskolc (pronounced kinda of like MISH-kohlts) is the 4th largest city in Hungary with a population of about 157,000 people. It is located in the north-north-eastern part of Hungary and is the county capital of Borsod-Abaúj-Zemplén county and the regional center of Northern Hungary.

We have taken trips here several times. Thankfully it’s only about an hour and a half drive from Debrecen. Personally I enjoy the train ride though. I can relax and let someone else do the driving for me, even if it might take a little longer. (^_^)

We enjoy touring the Diósgyőri vár (Diósgyőri Castle) they  have there that was originally built in the 12th century. It’s fun to look through. We have taken those that have come to visit from the USA to see this town and castle and everyone seems to enjoy it (even if it can be a lot of walking).

One thing that stands out to me about Miskolc is that it seems more oblong that the other cities we have been in. The tram ride from the train station all the way out to Diósgyőri vár takes over 20 minutes. It doesn’t mean much, but just an interesting observation that I had.

Another thing that stood out to me was when I tried to give someone a tract. I’ll admit that my Hungarian may play a role into it since I’m not a good speaker (though I have improved some since then). Miskolc is the only place in Hungary where I’ve tried to give someone a Gospel tract and had them refuse it. Usually folks would take it, if for no other reason than being curious or polite. But not here.

Pray for Miskolc as they are in need of good, Bible believing independent Baptist churches. The closest independent Baptist church is over an hour away. The town is predominately Catholic at just over 33%. They do have plenty of Calvinists there also at just over 15%. But the shocking part is that the Non-religioius/Unkown number almost 50%! Pray that God will raise up a family to go and preach the gospel here as well as work towards planting churches in this large city.

Some quick facts about Miskolc (and a few odd ones):

Enjoy some photos from Miskolc below (click to see larger images).

Around the city center

Eryn checking out the chain mail

Our pastor, Bro Graham, and his wife on the train to Miskolc

The prince and princesses

Little bit of a szivárvány (rainbow) 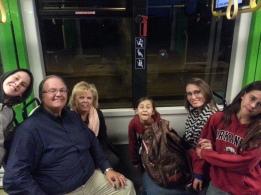 We were exhausted after 5 miles of walking in Miskolc

The incredibly steep stair climb up the tower at Diósgyőr Castle

Masey at the top of Diósgyőr Castle

My sister goofing around at Diósgyőr Castle 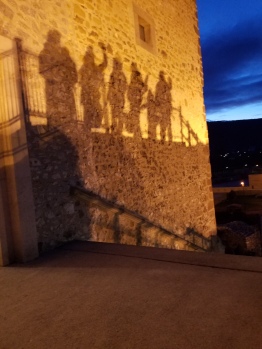